His Heart Was in the Right Place 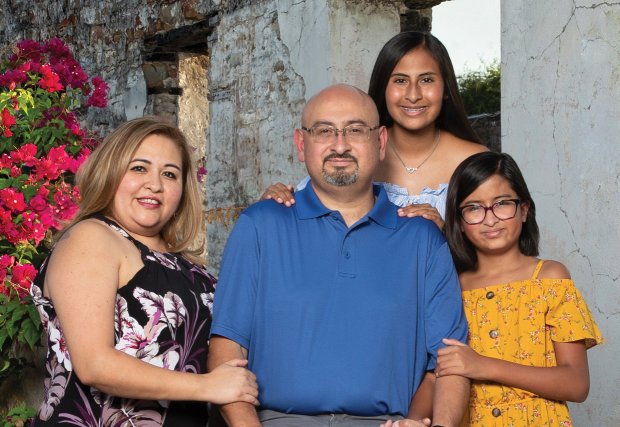 Despite the fact that he was vacationing in Las Vegas, Albert Banda wasn't feeling very lucky.

The 40-something father of two had been struggling with what he thought was indigestion for much of the trip. Banda, who is a registered nurse, didn’t think his “heartburn” was anything a little antacid couldn’t fix. But as he waited for his flight back to Texas, the symptoms got worse. “The feeling just wasn’t going away,” he says. “I felt pressure in my chest and knew I was having a heart attack.” Recognizing that he was in trouble, Banda asked his wife to get help — fast.

Like nearly 800,000 Americans each year*, Banda was, in fact, having a heart attack. A vessel that supplies blood to his heart was blocked and with each minute that ticked by, his heart was at greater risk for irreversible damage or worse. The sooner that vessel could be reopened, the more heart muscle could be saved. On that December day in 2018, help arrived quickly and Banda was rushed to a hospital in Las Vegas where a team was waiting to treat him. But his story didn’t end there.

Another heart attack quickly followed on the very day that Banda returned to Texas. “I was in the Emergency Room the night I got home,” he says. “That was before Fort Duncan had a cardiac catheterization lab, so I was transferred to a hospital in San Antonio where they put in another stent.”

The 46-year-old now had two stents and had suffered two heart attacks in a very short span of time. “After that, I was fine for several months, but in June 2019 something just didn’t feel right,” he says. “I didn’t want to take any chances so I headed to Fort Duncan.” Once again, tests indicated a heart attack. This time, thanks to the recently expanded cardiology program, the critical cardiac care Banda needed was right here in Eagle Pass.

Cardiologist Lon Walder, DO, provided treatment. “Dr. Walder decided to do a heart cath,” says Banda. “He discovered that one of the stents had developed extensive scar tissue.” This uncommon occurrence required Dr. Walder to perform a highly technical procedure to reopen the blockage. “He started with the smallest balloon and used increasingly larger sizes,” explains Banda. The treatment resolved the blockage and the recovered patient couldn’t be happier with the care he received at Fort Duncan.

“For me, it’s all about being able to stay close to home,” Banda says. “Having this procedure right here made a world of difference. It helped ease the situation for me, my wife and the rest of my family.”

He adds, “It’s very important to have access to these types of treatments locally and to have doctors who can perform them. It could mean saving your life.”

*Centers for Disease Control and Prevention